skip to main | skip to sidebar

A Dark Day for Psychiatry 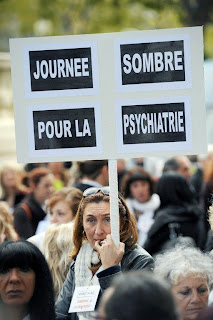 An article in the Guardian reports that in the first case of its kind in France, Danièle Canarelli, a 58 year old psychiatrist was sentenced to one year's suspended sentence for failing to recognize the grave danger posed by a patient she had been treating for four years.

The union for French state psychiatrists, which backed Canarelli during the trial, said that the landmark verdict was worrying and risked scapegoating the profession over a complex case.

I thought the case raised interesting questions about when or whether negligence should ever be considered as a criminal offense. Beyond that the case highlights psychiatry's sometimes conflicting  responsibilities-- caring for patients and protecting society from the actions of some of those patients.

A more detailed report of the case in Le Monde gives something of the flavor of the case. Here is my attempt at a  summary.

At the opening of the trial the President of the Court, aware of the controversial nature of the trial, spoke directly to the psychiatrists who had come to protest in support for their colleague. "We can understand the legitimate emotion of a profession," he said, "but we are not judging psychiatry or psychiatrists. For us it is a question of knowing if, in a concrete situation, serious misconduct has been committed." Referring to an article in the penal code under which 'unintentional offenses' may be charged, he added that, "There can be no impunity, society does not accept it."

This case began after charges against a murderer were dismissed because he was declared irresponsible as a result of psychiatric troubles. The victim's son opened a civil case against the doctor during which the judged referred the case for criminal prosecution because of a breach of duties of caution and safety. In France such prosecution is allowed if an indirect link between misconduct and damage exposes others to particularly serious risk that "could not be ignored."

In making this ruling the judge relied on the testimony of a psychiatric expert. Over a period of years, the expert pointed out, the murderer had been back and forth between prison and a psychiatric hospital for assault with a knife, arson and attempted murder. During this time he was repeatedly diagnosed as suffering suffering from schizophrenia 'with established dangerousness.'

While other doctors came to this conclusion, Dr. Canarelli did not make this diagnosis, regularly voided his involuntary status in the hospital and granted him furloughs. When asked by the judge why she had done this she replied, "You cannot keep someone involuntarily forever." When the judge asked how else one could treat someone who was unwilling to be treated, the doctor answered, "I was in a trusting relationship with him. He came to all of his appointments, which is rare, and there were no behavioral incidents during his hospitalization."

When confronted with her repeated disagreements with other doctors about this patient's diagnosis, she responded that , "He was a patient who was more complicated than others. I was faced with a conundrum. I was convinced that he had a psychotic condition, but I was puzzled [embarrassée] by the absence of symptoms."

The case against the doctor was strengthened when she was questioned about the patient's exit from her clinic three weeks prior to the murder. At that time, the patient's sister warned the doctor that her brother was making death threats. In addition he failed an appointment with the doctor because of a wound received during an altercation. At Dr. Canarelli's request the patient was sent to her office after treatment of his wound. However, he refused her offer of hospitalization and abruptly left her office. She said that she was alone with a nurse and felt she couldn't detain him, but she didn't  call for help. She waited three hours to call the police.

In response to this testimony the judge commented that the doctor's failure to call the police for three hours meant that the patient was "in the city, while you told us that he was sick and could do harm." This comment sparked indignation among the psychiatrists in the courtroom. "Judges should do internships in psychiatric hospitals," one audience member commented to another.

The prosecutor argued successfully that "there is a moment when social defense must come before the patient."

On December 18 Dr. Canarelli was sentenced to one year's suspended sentence for manslaughter [homicide involontaire]. The court concluded that 'shortcomings identified in monitoring the patient' were 'at the origin' of the behavior leading to the murder. These shortcomings, court concluded, constituted serious misconduct and warranted the criminal liability of the psychiatrist. Recalling the multiple incidents that should have alerted the doctor to the patient's dangerousness, the judge said that Dr. Canelli's attitude "bordered on blindness."

Above all, the judge noted, this doctor had time to see her patient evolve. The judge was careful avoid including all errors made by doctors in his judgement noting that, "contrary to other doctors …who must act and react in emergencies, she was able to register clinical observations over time."

The president of the Union syndical de la psychiatrie responded to the court proceedings by answering several questions. Here are two questions and answers.

1. Why do you support Dr. Canarelli?
"What bothers us in this process, is the impression that we must find a scapegoat. We consider unacceptable and will make this the main responsible psychiatrist, because here this was a complex situation where the responsibility of the physician is practically zero. What exactly is she being criticized for. … failing to ensure public safety, as if  that was her role and not that of the police. In spite of her reporting his flight, he was not arrested. We are not police officers. Between the patient and the psychiatrist, everything must be based on trust and therapeutic care, not security.
2. What impact would the conviction of Dr. Canarelli have?
This would surely lead to there being a sword of Damocles over every practitioner. This pressure transform psychiatrists into guardians of public order. The risk that  patients would then remain confined to the hospital longer -while you reducing the number of beds ! Fortunately, this kind of case is rare, because the police normally intervene in reported cases, and, it is always useful to remember, because psychiatric patients are not more dangerous than the rest of the population. .